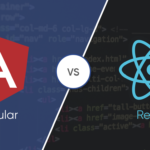 Soccer fans discuss whether they prefer Pelé or Maradona. TV series fans argue whether Game of Thrones or Breaking Bad is better. And, if you’re a rock lover, you’ve probably read hundreds of disputes between The Rolling Stones vs. The Beatles.

The same thing happens in the programming world with Angular and React. Both are perfect for any front-end web development job, even though they don’t serve the same function. Both Angular and React are meant for the same general purpose, but each will have its particular applications.

If you want to understand more about these concepts, it’s essential to dig deep into the features of Angular and React.

The key features of Angular

Angular is an open-source framework that was developed by Google. Its main objective is to be able to create SPA web applications (a single-page website). In the same way, it seeks to generate a comfortable and simple working tool. The data loading is done dynamically, and the development environment is very user-friendly.

Among its main features we can mention:

The main features of React

React was born to be an open-source JavaScript library. Developed by Facebook, the initial operation was limited, as it sought to manage the user interface. However, over the years, it has released numerous updates. Thus, it became a much more complete and competent framework.

For example, some of its main features are:

The most relevant differences between Angular and React

You can already guess that Angular and React can be used for similar things, but they have very marked differences in how they work.

Below, we’ll show you the main ones:

Angular vs. React: which one to choose for your next project

A competent front-end developer should know both tools. However, indeed, you won’t always use both, as it will depend on the characteristics of each project.

Both Angular and React offer a good user experience and outstanding performance. In the same way, both allow good mobile development, and they have a lot of resources and updates, as they have very active communities.

However, Angular may be more suitable for extensive projects. It is a framework, so there will be a large number of options to use. On the other hand, React appears as a very user-friendly library, perfect for small teams and even individual developers.

Now that you know the main differences between Angular and React, you are ready to face your next development projects, knowing that you can make a well-based decision on which will be the best for each case.

0 thoughts on “Angular and React: Main features and differences”