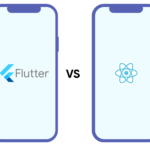 Flutter vs React Native: The New Kid on the Block or The Well-Known Player? When a company decides to create a mobile app, the easiest way to save time (and time is money) and get an effective, attractive, and easy-to-develop app is to select a cross-platform technology that allows you to create for Android and iOS systems with the same code base. Currently, there are a lot of tools that will help you with that purpose: React Native, Flutter, Cordova, Ionic, and a huge etcetera.

Nevertheless, to simplify our analysis of the right tool to build your mobile app, we will focus on two of the most popular ones: Flutter and React Native.

We will compare these two frameworks based on popularity, learning curve, architecture, and available documentation, leaving out biases and personal beliefs. But before getting into the technical field, let’s take a general overlook of these tools.

A general approach to Flutter vs React Native.

Google published this popular framework in 2018. To develop an application with Flutter, we use Dart, an Object-Oriented Language.

Google provides an advanced software development kit (SDK) with the idea of helping developers build their apps for multiple devices and platforms. Google Ads app, the Hamilton Broadway Musical app, Alibaba, eBay, and some other ones have been built with Flutter.

You can agree with us: those companies are two titans of the IT industry, and they are competing to create the best multi-platform framework. This makes for a hard decision as both of these tools are well-known and offer excellent support. It was created by Facebook in 2015, and it uses the very well-known language, JavaScript. This framework was one of the repositories on GitHub, with the highest number of contributors in 2018.

It is now supported by companies like Microsoft, Expo, Callstack, among others. Very renowned organizations had selected React Native as their framework to develop not only mobile apps but also desktop, VR, and web apps. In comparison with Flutter, React Native is older, has a bigger community, and has more users. This is a positive thing if we consider the support that you can receive. Currently, Flutter is growing really fast as well as its community. Both technologies are highly popular and very well approved by developers.

Our humble opinion is that, even when Flutter has been growing faster, React Native enjoys the popularity that it indirectly inherits from React web. At this point, Flutter is clearly superior because of its architecture.

React Native’s architecture uses a bridge to communicate JavaScript with the native modules, making itself slightly slower than native apps. We can clearly see this at the app’s highest performance point when the response ratio should be at its best, just like with games.

With a regular mobile app, the performance will be great using both tools, and we won’t notice a big difference. This is a significant point in favor of Flutter.

Using any of these tools is very easy after you have understood the language. On the one hand, React Native uses JavaScript.  This language is an “old fox” in the web industry known for being a bit tricky for beginners, but it used to be one of the primary languages taught in colleges.

On the other hand, Dart is the language to develop Flutter’s applications. It’s very intimidating for newbies, and it’s similar to Java or C#. Google is doing its best to help developers from other Object-Oriented Programming languages transition into Dart seamlessly.

We can conclude that React Native has a flatter learning curve, and the results are less expensive than Flutter.

As we’ve said before, React Native’s architecture splits the code into Native and JavaScript through that bridge that allows communication with the native modules. And this is very helpful when you want to use native components to provide users a native look and feel.

It is not possible to use those native components without another library’s help. However, Flutter’s architecture results in a fast option, thanks to Dart’s framework, Skia C++ engine. Flutter has rich documentation and offers detailed guides with graphics and video tutorials that make it really easy and simple to use.

However, React Native’s documentation is focused on experienced web developers who are familiarized with JavaScript. This is a negative point for React Native! But thanks to their time in the industry, this is not a problem for the community. You can find non-official documentation and tutorials without any problem. It is tough to decide which is the best option between these two frameworks as they both have pros and cons. In our opinion, the Flutter vs React Native challenge is complete nonsense. Selecting a tool and using it for everything is like using a hammer to cut a tree.

In every case, you should do a thorough analysis. When you need a high-speed app without a native look and feel, Flutter is a good option. But if you are ok with a native-like performance, React Native is the best choice.

Another notable point is the number of Engineers with experience in React Native. Thanks to the short gap between React Web and React Native, it is really easy for React Engineers to learn this framework.

We currently have teams working in awesome apps based on React Native with excellent results and happy customers. If you have an idea or want to make your product grow, contact us, and we will schedule a meeting!

0 thoughts on “Flutter vs React Native: The New Kid on the Block or The Well-Known Player?”