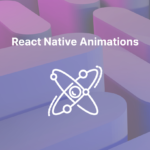 React Native Animations has a built-in API that allows you to create smooth, seamless animations for your app. With just a few lines of code, you can bring your app to life and make it stand out from the competition.

One of the great things about the Animated API is that it is declarative, which means you can describe how your animation should look and let React Native handle the rest. This makes it easy to create complex, multi-step animations without having to worry about the nitty-gritty details.

Animations catch users’ attention, you’re immediately drawn to it. So, using them is a must!

Sometimes in conversation with the client you might think that implementing animations could turn into a herculean task. But luckily, here you’ll find some more easy-to-code examples you can transfer to your own product development.

First, let’s make sure we understand the importance of using animation. Then let’s go over some different animation typologies and last, its implementation – some are even a one-line code!

Whenever you are coding up and designing, adding an animated feature is a great asset. Improves your product revenue and ups the ante. It allows you to animate values over time, such as the position of an element on the screen or the opacity of a view. The ‘Animated’ component is a powerful tool for creating React Native Animations in apps.

Here are a few examples of the types of animations you can create with the Animated API:

Fade in and out: Want to make an element appear or disappear with a smooth transition? The ‘Animated.timing()’ method is perfect for this.

Move elements: Need to move an element from one position to another? ‘The Animated.spring()’ method is great for this, as it allows you to specify how bouncy you want the movement to be.

Rotate elements: Want to give your app a more dynamic feel? Use the ‘Animated.rotate()’ method to spin elements around.

There are countless other types of animations you can create with the Animated API, and the best part is that they are all easy to implement. So why wait? Start using React Native Animations today and watch it come to life!

Here’s an example of how you might use the Animated component to create a simple fade-in animation:

In this example, the ‘animationValue’ is animated from 0 to 1 over a period of 1000 milliseconds (1’’). The animated value is then used to set the ‘opacity’ of the view using the opacity style property. When the component is rendered, the view will gradually fade in over the course of 1 second.

There are many other animation methods available in the ‘Animated’ component, such as ‘Animated.decay’, which animates a value based on a decay rate, and ‘Animated.parallel’, which allows you to run multiple animations concurrently.

You can also use the ‘Animated’ component to animate the position of an element using the ‘transform’ style property. Here you can also find one-line-code animations such as: Toaster, Progress bar, Loading skeleton, Glow, and Bounce!

React Native comes with an animation library which solves our performance issues. Reanimated 2.0 gives a more comprehensive and less abstract approach to stack up on it, and therefore being more functional to interact with gesture based animations. A perk of Reanimated, as we mentioned before, is that it can run animations on the UI thread which is a separate one from the JavaScript, allowing animations to run much smoother.

There’s a caveat: the reanimated plugin has to be listed last. For Android there are no additional steps needed, for iOS you just need to run podinstall in the ios/ directory.

You’d best explore these features and components of Reanimated 2.0

‘Shared values are a key component of Reanimated 2.0 in React Native, as Worklets are of great use to define small pieces of JavaScript code that we run when updating view properties or reacting to events on the UI thread, and Layout Animations are presented as the easiest way to animate the entering/exiting/layout of your components.’ Check this post in React Native Reanimated to dig into it and start animating.

In conclusion, React Native Animations add a dynamic and visually appealing element to your app. By using the Animated and LayoutAnimation APIs, you can easily create a variety of animations to enhance users’ experience. It’s important to keep in mind that performance is crucial, so be sure to test, double-check and optimize your animations to ensure the best possible experience.

Keep yourself posted to Effectus Blog and with a little practice and experimentation, you’ll rock the use of React Native Animations and other skills. If you want to explore more about React Native, check out our latest post on React Native Debugger.

0 thoughts on “Discover React Native Animations: dive into its perks”