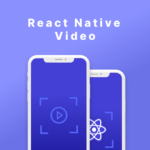 React Native Video: discover the fascinating uses you can make of it

You probably already know that React Native is a hybrid app framework that is widely used nowadays. After all, developers can create native apps with React Native code in an accessible way. Creating apps is very simple, even for novice programmers! However, it would be best not to fall into some common mistakes. This blog talks about all the essentials you need to know about React Native Video.

What to consider when implementing functions in React Native? Some developers think you can directly turn a website into an app by copying all the React code into the React Native app. Unfortunately, it’s not that simple: while React Native code resembles a React web app, several critical differences exist.

Mobile applications have many native functionalities and differences concerning the web. Thus, <div> becomes <View>, while <p> is now <Text>. In this sense, web elements incorporate video as native, since the HTML <video> element is used.

So how can a video be implemented in the mobile framework? Some may think it’s impossible, yet that’s not true. You will have to use one of the most popular packages, React Native Video. Following this, we will show you how to implement it in your React Native app.

React Native Video is a library that will allow you to add video features to a mobile device application. So far, there is no real alternative to this package. The truth is that you don’t need it either: this package has a size of 500 kB and works for all devices, besides being very functional.

As for the prerequisites, the installation and use of this package may vary depending on the device you are developing. In this case, we will talk about the setup for an iOS device, but you shouldn’t have any problems either installing it or developing on Android.

Now that you know this, we will show you how to install the package.

How to install and use the React Native Video package?

Before you can use the library, the package must be installed in the project’s base directory. Just run:

In case you are on a Mac, you will also need to run the following command:

Pretty simple, right? Now you will have to learn how to use React Native Video. However, before doing so, you must know what you want to achieve with it.

A clear example occurs with applications with dynamic backgrounds at the time of login. You can choose a fixed background, but also a dynamic one. To do so, you must import the video component of the library to the component where you want the video to show (the “animation” of the background).

One thing to keep in mind is that it doesn’t work in the iOS simulator. It only works if you run it on an actual device.

Learn how to place a video file in your projects

The video file can be either a file from your project or a link from an external resource. For example, let’s assume your file is called “start.mp4” it would look something like this:

If you wonder what you did, the answer is simple: you have passed your project’s video file to the component. Now, you can also place external videos. This aspect is great if your brand has an institutional video on YouTube, for example. It would look like this:

What other features can you use for React Native Video?

You’ve already achieved a reasonably basic functionality with the React Native Video component. However, you have others to extend the behavior. Some examples are:

Overall, React Native allows you many possibilities. One of them has to do with video, which, as you can imagine, is different from the web. In those cases, you just write HTML elements, but here you must install these kinds of elements for the app to be functional.

An important detail: although videos are handled similarly to the web, developers should consider some features. For example, full-screen mode, the ability to not be automatically activated or to resume playback when the application is minimized.

You’re done! You now know all the essentials about React Native Video. It can be very useful to add great value to your app. We hope you can apply these tips in your future developments!

And as you already know: if you want to read more articles about React Native, you can continue browsing our blog, and you can also check out this awesome tutorial.

If you want to empower your team using ours, or you have an idea you need help with, feel free to schedule a call with us using the following link.

0 thoughts on “React Native Video: discover the fascinating uses you can make of it”